The things we do for love

Some time ago, I promised my little boy to paint the door to his room. I’m not much of a painter. For the most part, my humble attempts at drawing turn out as little more than what you’d expect from a child. But hey, he’s only five years old, so I thought, why not.

He loves knights. So I painted a castle. I can do that. When it comes right down to it, a castle is just a house with ambitions.

He loves pirates. So I painted a small lake, with a pirate ship. A ship is just an overgrown nutshell, and all it takes to identify it as a pirate ship is the skull and crossbones.

When I was almost done, he asked whether he could see it. I had the door propped up in the basement. I said, okay, come on down. He had a good look, was quite pleased with what he saw, but then…

Then he said, you know, I’d like a dragon.

No, was my first reaction. Houses with ideas above their station, okay. Nutshells with flags, sure. But a dragon? I didn’t think my skills up to such a task. Let’s be real, I said. I can’t do that. It won’t be perfect. I’ll just spoil the entire door, and you’ll be sad.

But then I saw the look in his eyes, which said, Mom, I believe you capable of anything. And I thought, wait a minute. I can write books, for crying out loud. I can patch up jeans so far beyond salvation, not even a punk would consider wearing them anymore. I’m a roleplayer. I’ve killed dragons! How hard can it be to paint one? A dragon’s just a big chicken with claws and fangs.

I closed my eyes, pictured a dragon and started painting, line after line, until from all the wrong lines, the right ones emerged, and a dragon took wing. It’s not perfect, but it’s a dragon all right, and my little boy loves it. 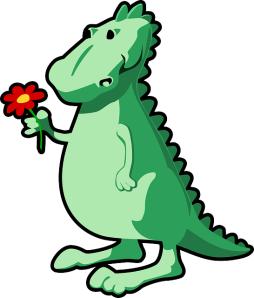 And that, in all likelihood, is what being a mom is all about. Not to say no, just because you’re afraid you might not be perfect. What the kids will see is that you’ve tried, and done your best to make them happy. Your efforts won’t win a prize? So what. You don’t need one. Happy Mother’s Day.

My name is Angelika Rust. I was born in Vienna in 1977. These days, I live in Germany, with my husband, two children, a despotic couple of cats and a hyperactive dog. After having tried almost every possible job from pizza delivery girl to HR consultant, I now make a living knowing English. No, I haven’t yet figured out what I want to be when I grow up, whenever that may be. In the meantime, I write the occasional book.
View all posts by angelikarust →
This entry was posted in Ramblings and tagged Mother's Day. Bookmark the permalink.