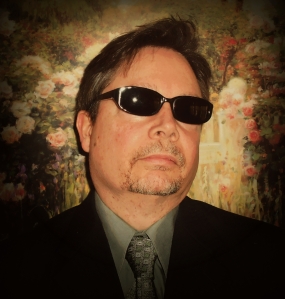 in an author group, where he spent an inordinate amount of time trying to pit his American wits against sharp-tongued, British Jesamine James (by now, they’ve taken that little war a step higher and are now battling publicly on their own blog).

Some time ago I allowed him to talk me into beta-reading his latest work, and since I enjoyed that quite a bit, I thought I’d invite him over for a little interview.

I’m a fifty-two year-old man who finally knows what he wants to be when he grows up. I’m a bit of a peculiarity among the world of writers in that I didn’t grow up with a love for writing. In fact, I hated it. This was because of pens and pencils and the way they made my hand throb after only a few minutes of scribbling out a few unreadable words. Computers and keyboards came along and I found out that writing didn’t have to be painful – that is until you try to get published.

Usually lost in a fantasy world of some sort. I’ve been a day-dreamer all of my life. The real world is too damned scary. I prefer to live in the worlds I create. I suppose that’s why I enjoy writing. I get to play God and everything works out the way I want it to. My physical body is in a home that is in bad need of repairs in rural Pennsylvania, USA, but my mind is in a land far, far away.

I’m fine. And you? Would you like some tea? That’s a bit of an odd question for an author interview. I’d have to say that I’m like most writers I’ve met: moody, depressed, discouraged, and disappointed. Yet, I have an unaccountable hope that some day I might write a break-out book that will lead me to fame and fortune. I can’t understand why I think this way. I’m typically a ‘glass half-empty’ kind of guy. I guess I have to have an excuse for all the time I spend writing out my fantasy worlds.

Which book do you want to talk about? Tell us briefly what it is about.

Its an action thriller about a man who is down on his luck until he meets up with an ultra-wealthy man who offers him a job as an assassin. The main character, Bucky James, is an ex-marine, who has served in Iraq and Afghanistan, so he already knows how to kill. The lure of three million dollars a hit is too much to turn down, so he goes for it.

Once Bucky begins his training, he discovers that his new employer, Raith Aldridge, whom I modeled off of Bram Stoker’s Dracula, is not the man he claims to be. Mr. Aldridge is a manipulative man with a short fuse who enjoys a good mind game; he also loves to abuse his hired guns at will.

Bucky must battle his conscience, the law and Dracula incarnate as he struggles to survive. Thrown into the mix is a renewed hope that his estranged wife, whom he still loves, will take him back.

It started out as a bit of a rant about a process the company I work for uses. In the book, Raith Aldridge works for a company called, “Solutions Incorporated”. Solutions Inc. is an outside contractor that uses the Six Sigma business process to help companies run more efficiently. Six Sigma (which I lovingly call ‘sick sigma’) analyzes collected data and attempts to cut the fat while making things run more smoothly. The end result is usually a lot people getting fired and the rest of the employees getting more work dumped on them (with no additional pay). One day a few questions came to mind. What if someone took Six Sigma to the extreme? What if a company analyzed their competition to figure out the key players in those companies and then bumped them off? What if Bill Gates had murdered Steve Jobs well before the I-phone had launched? It steam-rolled from there.

Hopefully they take home a copy of my book. Ba-dump-bump. Sorry – sometimes I just like to be silly. I think there is a danger of the reader thinking I am one of those anti-wealth socialists that seem to be crawling out of the woodwork these days. Mr. Aldridge is an extremely wealthy man, and his wealth allows him to exploit others, but it is his evil heart that is the problem, not the money. I wanted to convey the evils of greed and power-lust, not that having a lot of money is a bad thing. I also wanted to portray hope and the healing power of love. There is a subtle change that comes over Bucky when he finds out that the man his wife left him for has dumped his wife and he still might have a chance to get her back. I’m a romantic at heart and I was glad to be able to find a way to bring a little romance into the story.

Most definitely the characters. I look at the plot as an excuse to tell you about some very unique people that live inside my head. Its not what a character goes through in a story that makes it interesting to read, its how they react to the situation. An example is one of the first novels ever to be penned. Who would have thought that you could write an entire book about an insane man attacking wind-mills and it turn out to be thought of as one of the founding works of modern Western literature? It wasn’t the plot that got it there. It was that crazy relationship between Don Quixote and Sancho Panza that made it the masterpiece it is.

What’s your favorite book of all time and why?

That would have to be Harper Lee’s To Kill a Mockingbird. There are many reasons I love it and I’m not sure I could touch on all of them without boring you to tears. I think the main reasons are the feel the book has and how Lee puts you in the heart of the action, as if you are right there watching it on a time-machine screen. It only takes a few pages to have me transported back in time to a small, one horse town in Alabama. I get to see through the eyes of a six-year-old girl and watch a part of her innocence die as her father confronts prejudice. It is a warm and inviting book that tackles a difficult subject and leaves you changed at the end. I can’t wait to read it again.

My name is Angelika Rust. I was born in Vienna in 1977. These days, I live in Germany, with my husband, two children, a despotic couple of cats and a hyperactive dog. After having tried almost every possible job from pizza delivery girl to HR consultant, I now make a living knowing English. No, I haven’t yet figured out what I want to be when I grow up, whenever that may be. In the meantime, I write the occasional book.
View all posts by angelikarust →
This entry was posted in Author Interviews and tagged action thriller, author, DB Stephens, interview, writing. Bookmark the permalink.