Today I’m banging the big drums – I’ve been invited to participate in the blog tour for the launch of Scott Butcher‘s new book, 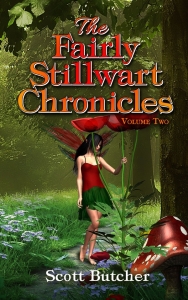 The Fairly Stillwart Chronicles Volume II. And it is with great pleasure that I do, indeed, participate. I mean, hey. Fairies. Fairies! Look at the cover. Could you have resisted?

Well, maybe. If you didn’t like fairies. But you do. Or else you wouldn’t still be reading this.

Okay, let’s have a look at what sort of book this actually is. The best way to do that, is turn it around, and see what’s written on the back. Wait a second…here. It says,

“Stillwart the Pixie is back with her rag-tag group of magical friends! Determined to complete her mission to the Northern Lands, with the hope of saving her people from extinction, she ventures from Nova Scotia to Ireland.

The journey is long and arduous, fraught with danger at every turn, but Stillwart and friends band together, knowing their precious cargo is needed. With only their wits, a cell phone, and the human they’ve come to rely on, the group presses forward, facing each obstacle with spritely courage. To make matters works, the call of the Thorn Tree is strong, making the expedition all the more urgent.

The Fairly Stillwart Chronicles are a series of six short stories detailing the life and adventures of Stillwart the Pixie and her adopted fairy family. The stories capture the Southern Land Fairy folklore by bringing to life their world, hierarchy, and the challenges they face to keep their race and magic alive.”

Promising. Especially the part with the cell phone. What is a bunch of fairies doing with a cell phone? I know of course, because I’ve read Volume I about a year ago…and I know even better, because Morning Rain Publishing was kind enough to supply me with an ARC (that’s Advanced Review Copy, in case you’re not familiar with the expression) of Volume II, which I happily spent the past week with. I did remember the first part as sweet and charming, and something I totally would read to my kids, if they spoke English, which they don’t (yeah, we’re working on that). What impressed me most was the absolute certainty in the author’s voice. There was never even a single doubt that yes, fairies do exist. Anyhow, here’s what I think about Volume II:

The Fairly Stillwart Chronicles Volume II begin with a brief overview/introduction of all the characters, something I usually find hugely annoying, but this time found rather helpful, as it’s been a year since I read the first volume. The introduction also includes the new characters we haven’t met yet. I must admit, I skipped that part, as I prefered to meet them in the story.

The story itself picks up shortly after the first volume ended – Stillwart, the pixie, and with a few of her friends, have been taken prisoner by the evil, self-declared pixie ruler Tory Blithe. He tried to turn one of the human girls of the company, Phoebe, into a slave-like brownie, but due to Phoebe’s own inherent magic, it didn’t quite work out as planned. In addition, Blithe wants to get Stillwart to agree to marry him, and quickly finds that, given her temper, he might have bitten off more than he can chew…this is where the fun starts. I won’t tell you more about the story, as I don’t want to give too much away (but yes, Stillwart gets to blow a few things up).

Mr. Sooty, the owl, remains my all time favorite character (“Pixies don’t taste good.” “Do brownies taste good?”). I would have liked to see more of my other favorite, the one that used to be called Fairies Don’t Exist. The cell phone only plays a minor part this time, and most importantly – I think I can tell you this much without spoiling the plot – as a stretcher, which is one of the most sensible uses of mobile phone technology I’ve ever come across.

All in all, this is a book with a unique charm and magic, clearly written with the aim to make the reader feel special. At one point, you even get told that in order to be able to read those lines, you need to have a magic spark yourself… Long story short, it’s the sort of children’s book I heartily approve of – a fairy tale, not a patronizing lecture.

Now you want your own copy, right? For the moment, all you can do to get one, is, go to the Morning Rain website and use this Coupon code (and yes, it’s valid for Volume I and II).

After the release tomorrow, the book should also be available on Amazon and Kobo.

Or maybe you’d rather win stuff? Easy, just enter this giveaway – it’s open for anyone who enters, or talks about the book on FB, Twitter, Instagram, Google+ using the hashtag #Stillwart. You can win a Fairly Stillwart Chronical Notebook, MRP bookmark, and an MRP Tote. 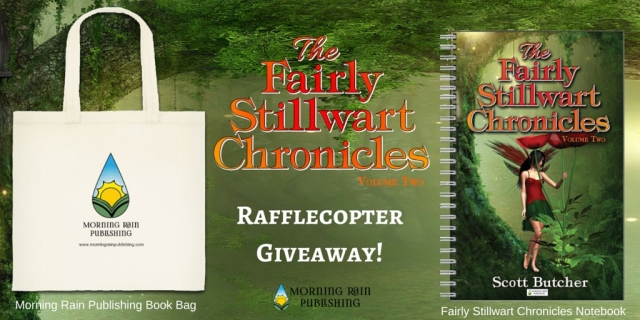 Hmm…you’re still here? You’re waiting for something? An answer maybe? To yesterdays’s riddle? Okaaaay….the answer is….*cue ominous drums*…TURN. You knew that, of course, having guessed it easily enough.

And here’s a new riddle for you…

The blog tour will continue tomorrow on Morning Rain’s own website, because tomorrow is the big release day! Good luck, Scott, and much fun to everybody readin this cute little book!

Wait a second…you’re still here? Heh. That’s good. Because this means your chance to, at least virtually, meet the author…

Hi Scott! Now, who exactly are you?

A writer of children‘s books, and perhaps a little bit of a child myself. Sometimes I do other stuff, so I might be other things when I do that other stuff. Gee, these questions are deep.

Don’t worry, it gets worse. Where are you?

And finally, how are you?

Now, do tell us about this luverly book of yours.

It continues the adventures of Stillwart, a pixie foundling, as she travels to Northern Pixie to help save a people she’s never met. Stillwart was the only Pixie in the Great Southland, but one day she discovered her pixie heritage and was called upon to lead a small troop of pixies and fairies on a mission to help save the Northern pixie in far off Ireland. It begins at St John’s in the Canada place, and the opening Chronicle is told to us by Muckrake the Elder, a pixie scribe descended from the pixie Kings of New Foundland. Muckrake has been in rebellion for decades fighting slavery and the abomination of transconfiguration. St John’s is in turmoil and Stillwart’s party of sprites land right in the middle of it. Two other Chronicles are in the volume, and they record Stillwart’s adventures as she travels from the Canada place, to the pixie enclave at Tinitagel in Cornwall, and then onwards from there to the old country, where all is not as it seemed.

I used to read to my daughters, and often made up stories for them. This is the type of story I’d tell them. Reading with your children is one the best things you can do as a parent to bond with your child. In part, the Stillwart stories were written to be shared between children and their parents.

Tell us about your main character.

Stillwart is ugly and brown. She’s wilful and rude, but she’s also loyal, smart, and perhaps some of her otherwise belligerent pixie temperment is quelled during her time living with the fairies. She lives in the Southern Fairy Realm, with polite, beautiful, glittery-golden fairies everywhere (yuck). She’s strange and dour, very much an outsider. But she makes her place as best she can, and is perhaps noble of heart if not in name. Oh! And she eats bugs.

Yummy. Is there a song you’d associate with your book?

It would have to be a Katie Perry song. Songs. The first volume (containing the first three chronicles) is Firework. The second volume containing the concluding chronicles is Wide Awake. But to understand those choices you’d have to read the books.

Which actors would you cast for the movie?

Selina Gomez as Stillwart. Or maybe that girl from the Hunger Games, Jennifer Lawerence. Oh, but it would have to be a muscial, so Selina Gomez. Although if Jennifer Lawerence goes back to being blonde she could be Appleblossom. Can she sing? We need a male hunk for Nightwood, and a young one at that. A young Ben Afleck. Colton Haynes maybe.

If you could make up your own genre for this book, what would it be?

What? It’s already in the Australian/Canadian/European pixie tale genre, why would I want to make anything up? Oh. Sorry to the Americans, next book series… you guys are in.

Don’t eat too much candy on road trips. Though that’s actually from volume one, it’s still something to live by. Also, pixies don’t taste good, so don’t eat those.

Is that true or are you just trying to protect the pixies? No, seriously, what are you currently working on?

Ah…the responses to your blog questions. But I might also be working on a sequel to the Fairly Stillwart Chronicles. It’s called the Magic Sisters and will have some of the same characters developed in the Stillwart books, but will be much darker – a book for older children, and perhaps young adults.

Do parts of you shine through? Are some characters like you, or friends, or family?

Oh, there’s a bit of me in all my characters, from the gruff and ruff Muckrake the Elder, to his stuttering son, Muckrake the Younger. Stillwart herself has a lot of my characteristics, and her travels between Australia and Canada reflect my own experiences, though they are her own adventures.

How does a typical day for you look like? What do you do when you’re not writing?

It’s different every day. I have my own little company and at times we’re quite busy so that writing has to be put on the back burner, but then there are the quiet times when I can fill at least a part of my day with writing.

Is there an author you’d love to be compared to?

May Gibbs and Enid Blyton, whose works I read to my daughters when they were young…though maybe I embellished and added stories of my own making when we ran out of their stories to read.

What’s the most stupid question you’ve ever been asked?

Well, I could say the‚ What are you doing now?question. But that would be me just being factious and officious. I knew what you meant, but the pixie in me came out and I couldn’t resist.

Aaaaaaand…that’s it. Thanks for staying until the end, and don’t forget to visit Morning Rain tomorrow for the big release day!

My name is Angelika Rust. I was born in Vienna in 1977. These days, I live in Germany, with my husband, two children, a despotic couple of cats and a hyperactive dog. After having tried almost every possible job from pizza delivery girl to HR consultant, I now make a living knowing English. No, I haven’t yet figured out what I want to be when I grow up, whenever that may be. In the meantime, I write the occasional book.
View all posts by angelikarust →
This entry was posted in Author Interviews, Book Reviews and tagged book release, book review, books, brownies, children, e-books, fairies, fairy tale, fantasy, Morning Rain Publishing, MRP, pixies, Scott Butcher, Stillwart. Bookmark the permalink.