People have often told me that I’m too innocent, too naive. This post is probably going to prove them right, and more. The sad fact is that Billy Joel got it exactly right. People will tell you that you’re too naive the instant they figure out that you have not lost faith in the things you believe. (The link doesn’t work for Germany due to the usual GEMA issues. Hope you’ll have more luck in other countries.)

All over Europe and large parts of the rest of the world, people are talking about the refugee crisis. Recently, the topic swept into our household. I was talking to the kids about how they mistreat the way too many toys they have, and about appreciating what you’ve got. And as such discussions go, it led to talking about other kids in the world, who have absolutely nothing. My little boy asked the usual questions. Why do they have nothing? What is a refugee? Why can’t they stay where they are? Why do they have to leave everything behind?

I went to the blackboard that’s mounted on one wall in our living room, and drew this: 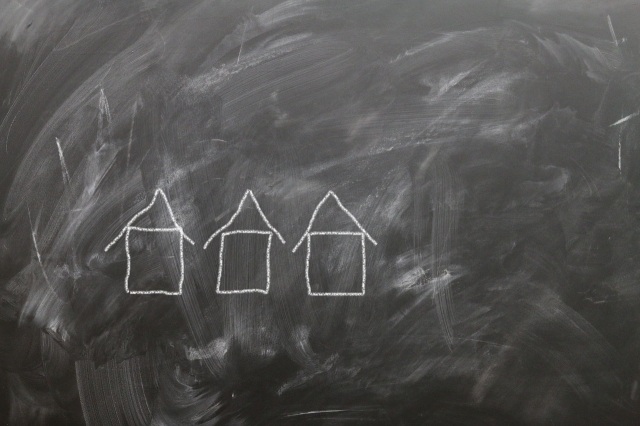 And I told him, this is what war looks like. It takes away everything, and all you can do is run, because there’ll be bombs dropping on your street and your house will be gone. He looked at me in shock and said, they can’t go back. We have to take them in.

No, it’s not that simple, people tell me. If we let them all in, we’ll also let in the extremists and terrorists. I’m not denying that it isn’t possible. I’m not denying that among those washed up on Mediterranean shores might be some with fundamentalist views. But will sending them back change those views? Will stopping them with barbed wire and impossible regulations and xenophobic statements help in any way? Or might it be a much better idea to welcome them and show them the possibilities a more open-minded society has to offer? Might it be, they’ll turn out less extreme and more accepting if they received less prejudiced judgment?

It’s a question of faith, really, and of how to deal with your own and other people’s beliefs.

A few days ago my little boy came home with a note in his school calendar, telling me he’d caused a disturbance during mass and we should talk to him about how to behave in a church. I’ll admit, I was a bit miffed. Just like me, my boy isn’t a member of any church, and he should have been offered the possibility to stay in school instead of being forced to attend a boring religious service. I also know a good part of the bible by heart, thus I remembered Jesus demanding that they let the little children come to him. He never said anything about them having to behave.

Anyway, I’m fond of mutual respect, so I told my little boy that many people who go to church really believe in the things the priests say, and if he causes a disturbance, they will feel hurt.

They are stupid, he said.

No, I said. They are not. You know, it’s like this: there are many, many questions to which humans don’t have an answer. Why is the sky so big? Does it end somewhere? If yes, what’s behind that end?

He nodded slowly. You see, I went on, the people who believe in god, they also seek an answer to those questions, and they choose to believe that their answer is god. Do you have a better answer? He shook his head.

That’s why we should always respect other people’s beliefs, I told him. None of us knows the truth. He understood. He’s only seven years old.

And yes, it’s really that simple. And I wish that every politician anywhere in this world had to explain and justify any new law, any new legislation, to a child, before it is passed. There’s nothing wrong with being innocent and naive. There’s nothing wrong with dishing out Peter Pan advice. Imagine a world with Peter Pan saying he isn’t going to grow up, and Wendy not answering him that she thinks it’s his biggest pretend. Imagine all the Wendys of the world shutting up. That’s the kind of world I’d love to live in.

That’s how naive I truly am.

My name is Angelika Rust. I was born in Vienna in 1977. These days, I live in Germany, with my husband, two children, a despotic couple of cats and a hyperactive dog. After having tried almost every possible job from pizza delivery girl to HR consultant, I now make a living knowing English. No, I haven’t yet figured out what I want to be when I grow up, whenever that may be. In the meantime, I write the occasional book.
View all posts by angelikarust →
This entry was posted in Ramblings and tagged belief, Billy Joel, extremism, faith, innocence, naive, naivety, peace, Peter Pan, refugee, religion, respect, war, Wendy. Bookmark the permalink.