This is one of the many, many books I picked up on a free day. 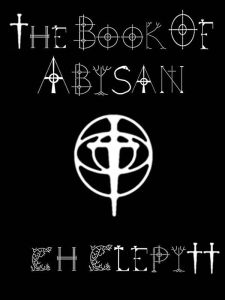 As usual with those free day finds, I went into the book without even reading the blurb. I love doing that, it’s a bit like going to a sneak preview at the movies. So when the first few pages told me there was a prophecy about two chosen heroes whose task it was to save the world, I was a bit disappointed, but ready for the classic fantasy tale.

It was obvious within seconds who the chosen heroes – heroines, of course, because feminist – would turn out to be, but from there on out, nothing was predictable anymore and the words ‘classic fantasy tale’ stopped applying.

Instead, the characters took over – especially Jacques, a mainly grumpy, sharp-tongued, gothic, tattooed, martial arts enthusiast from our world, who gets tugged into a fantasy realm where something akin to the Spanish inquisition wages war on all practicioners of magic. And it’s up to her and a petite witch named Yfrey to stop it. Along with both their brothers, who are mainly useless and wrong, but for all the right reasons, they stumble through portals, meet people ranging from strong to crazy, and have to come to terms with shadows of abuse from the past.

Apart from the heroes being heroines, the one thing people might call feminist about this book is probably the simple fact that women can do everything a man can do. In my naive little world, we don’t call that feminist. We call that normal.

Occasionally I found myself wishing for a slower pace, not because it read rushed, but because I wanted to spend more time in the worlds the author has created. I would have loved a few more details, history, even descriptions of the landscape, just so I could stay a while longer. There was the odd typo or free-floating speech mark, so another edit wouldn’t harm, but this was one of the few books where I totally read over the minor flaws due to the strength of the author’s voice. What C H Clepitt does best, is dialogue. Every conversation, every tiniest exchange, read completely natural and realistic. It didn’t feel like reading anymore, but like listening in on good friends talking.

I got hold of the C H Clepitt on Facebook, 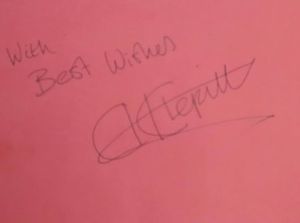 and asked her a few questions. Here’s what she had to say:

Who are you?
C H Clepitt, author, AKA The Grumpy Badger

Where are you?
Underground, somewhere in the UK

How are you?
Fine, thanks (does anyone actually say anything else to that one?!)

Oh, you wouldn’t believe some of the answers I get. Not everybody is a polite Brit 🙂 Now, let’s talk about your book, The Book of Abisan.

It’s a fantasy set between several different worlds. I don’t want to give too much away as you really need to read it, but I will say that it’s packed with excitement and you’ll never be able to predict what happens next.

I whole-heartedly agree. Why did you write it?

Same reason I write all my books, because I had to. Once a book idea comes into my head I have to write it, otherwise where would the characters live?

In your head, where they’d drive you nuts. I know the feeling. Now tell us about your main characters.

The Book of Abisan has two main characters. Yfrey, who is a witch from a magical world and Jacques, a woman from a world much like our own. Yfrey is very purpose driven and mission focused, whereas Jacques is angry and confused. As they get to know each other they develop and grow. Check it out, you’ll see.

If you could make up your own genre for this book, what would it be?

I think that books by C H Clepitt should be a genre of their own, because I hate trying to fit things into little boxes just to make people feel comfortable. Step outside your comfort zone and try something different. If you like one of my stories you will probably like all of them, so try not to think about the genre too much. Most of my stories confuse people anyway because they genre hop, so don’t focus on labelling it, just focus on enjoying it.

Of course there’s a message, as you can probably tell I am quite opinionated. If I have to tell you what it is I’m doing something wrong though!

What are you currently working on?

A comedy called “I Wore Heels to the Apocalypse”. Watch this space (or my facebook page /chclepitt) for more info!

Sigh. Means I have to wait longer for that sequel…Which target audience do you write for? What do you think makes your book especially appealing for that audience?

I never write for a specific audience, again because I don’t much like labels. I write what I enjoy and hopefully people will enjoy reading it. I do deal with adult themes though, so it is definitely not a children’s book. People who have read it have suggested that it’s more “young adult”, and I’m OK with that.

Why are you a writer? Were you born to be one, did it just happen, was there some moment of epiphany…?

I’m a writer because I have something to say. I love writing, entertaining people, and it’s the best feeling in the world when someone takes the time to tell you that they enjoyed what you have written.

Where do you get your ideas? What inspires you?

Things in the news, things that happen around the World. You can’t change the World alone, but you can maybe change peoples’ perceptions within it. My series of Sci Fi short stories “The Crew Chronicles” were inspired by an article I read about unrecorded violence against Transgender people. It inspired me to create Crew, a character with no gender, in the hope that it will force people to re-evaluate what they consider “normal”. It’s only because of the way society views it that gender and gender stereotyping is such a big deal. If we didn’t see “normal” then we wouldn’t target “different”.

Characters. Characters and character relationships are the story. It doesn’t matter how exciting the plot is, if the characters don’t respond plausibly to the situations in which they find themselves then you won’t enjoy it.

I knew you would say something like that. Do parts of you shine through? Are some characters like you, or friends, or family?

Anyone who knows me will recognise my voice and sense of humour within my stories. I think you can’t help but incorporate parts of your own life and own experiences within your writing, your writing is a part of you, as are your experiences.

If you could have a superpower, which one would you choose?
I’d be able to fly, how awesome would that be?!

Get yourself a copy of The Book of Abisan.

My name is Angelika Rust. I was born in Vienna in 1977. These days, I live in Germany, with my husband, two children, a despotic couple of cats and a hyperactive dog. After having tried almost every possible job from pizza delivery girl to HR consultant, I now make a living knowing English. No, I haven’t yet figured out what I want to be when I grow up, whenever that may be. In the meantime, I write the occasional book.
View all posts by angelikarust →
This entry was posted in Author Interviews, Book Reviews and tagged Amazon, amreading, CH Clepitt, chosen hero, ebook, fantasy, feminist, Kindle, prophecy. Bookmark the permalink.

1 Response to The Book of Abisan, by C H Clepitt