Posted on August 8, 2016 by angelikarust

Those of you who occasionally take a look at my website may have noticed that I’ve begun to upload a few pictures of mine. Photography has always been something that fascinated me. As a teenager, I even managed to convince my parents to gift me a rather expensive camera. But back then, taking pictures meant having to buy rolls of film and all that.

Anyway, it turned out to be too expensive a hobby for a teenager to afford, but hey, those days are gone, thanks to digital photography, and I have an okay camera now, which I drag along everywhere I go to snap shots of everything that sparks my interest. I’m by no means a professional photographer, but I’m slowly coming to believe that I make a decent amateur. I got a tiny bit of proof for that assumption a while ago, when one of my pictures got chosen for a Summer Selection Award on ViewBug.

I don’t know why. It’s just a camel, for whatever’s sake. But apparently it’s a pretty camel. Pretty enough to attract the attention of the people at Newsnibbles, who asked me if we shouldn’t team up – their wits, my photos – and create funny memes. I said, why not. So we took the camel and made this. 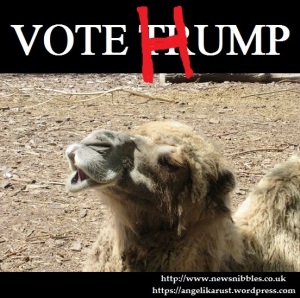 (And yes, I’m aware that as a European, I have only a limited amount of rights to make fun of US politics, but the outcome of the presidential elections is going to affect us all, like it or not…and no, it’s not an endorsement for any of the candidates either.)

Now it appears I’m part of the Newsnibbles team, and we’ll be creating silly stuff on a weekly basis. I’m quite looking forward to it. In the meantime, take a look at my galleries. Some of the pictures aren’t too bad, and you can use them for free.

My name is Angelika Rust. I was born in Vienna in 1977. These days, I live in Germany, with my husband, two children, a despotic couple of cats and a hyperactive dog. After having tried almost every possible job from pizza delivery girl to HR consultant, I now make a living knowing English. No, I haven’t yet figured out what I want to be when I grow up, whenever that may be. In the meantime, I write the occasional book.
View all posts by angelikarust →
This entry was posted in Ramblings and tagged award, camel, creative commons, license-free pictures, meme, Newsnibbles, photography, Trump, ViewBug. Bookmark the permalink.