In the wake of the EU elections, it might be the obvious thing to talk about Nazis, but apparently, luckily, we’ve been spared a major surge of right-wing populists. They did harvest some gains, but remain well below ten percent, so let’s take a moment to lean back, breathe deeply, and dwell on the thought that the real surge was a green one, especially among voters aged thirty or lower. That’s enough to give us hope for the future, and time to talk about different Nazis. Less real ones. Raccoons, and vampires.

Raccoons first. The Nazi raccoon is, of course, a myth, even as it was pushed by established newspapers such as the Times.

Fact is, the entire population of German raccoons seems to stem from two raccoon couples let loose around Edersee – and rumor has it that this happened on orders of Hermann Göring himself, who was an enthusiastic hunter and looking for new game. Bullshit. Berlin actually vetoed the release of said couples into the wild, warning of the damage raccoons can cause, only they took so long with the paperwork, by the time they got round to voicing their misgivings, it was already too late. Either way, the rumor is a brilliant one, given how the creatures were released in 1934 and from there went on to conquer Europe. That’s where any similarities end, though, thank heaven, because the raccoons were rather more successful. They’re also infititely less horrible, and way cuter. A couple dozen after the war, they numbered around 20k 25 years later, and around half a million now. 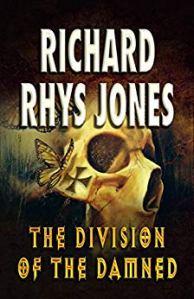 And yes, this is a recommendation, for a book titled Division of the Damned, by Richard Rhys Jones. A friend recently made a list of authors he liked, incuding this book, which he refered to as the book with the ‘effing Nazi vampires’. Needless to say I found that little note pretty enticing.
I went into it expecting either satire, or a thriller. It’s neither. Fact is, it reads like historical fiction, which adds an interesting aspect to the whole concept.
Based on what must have been a ton of research of history and religion, Sumerian and Christian, the author wades through the last two years of WWII. In his version of events, a certain Romanian count approaches Himmler, offering him the solution to all his problems – a vampire army. The count, of course, has his own agenda, as does the demon Lillith at his side.
The image of Nazi Germany that Richard Rhys Jones paints is an image along the front lines, of disillusioned soldiers whose once-upon-a-time notions of their own superiority have long died in the reality of the atrocities committed by their regime and fellow soldiers, and who are left with the knowledge that they someday soon will have to pay for it all. It’s a believable and relatable picture of fools falling for lies, of regret and despair, and the need to somehow make amends.
The book is a bit lengthy in places, and regrettably short in others, the latter especially towards the end, where you’ll have to leave an unlikely group of main characters you’ve come to care about – German, Russian, English, and Jewish – behind enemy lines, and never learn what became of most of them. I had a little chat with the author though, and he told me he’s in the process of writing a sequel, which means sooner or later we will learn what became of those folks.
All in all, it’s a weird, enjoyable read, though another proofread wouldn’t have come amiss. The latter is also why I originially rated it three stars, but I’ve since added a fourth, due to the fact that it’s a powerful story that just remains stuck in your head. Here’s the Amazon link, if you need to get your copy right now, which of course, you do.

My name is Angelika Rust. I was born in Vienna in 1977. These days, I live in Germany, with my husband, two children, a despotic couple of cats and a hyperactive dog. After having tried almost every possible job from pizza delivery girl to HR consultant, I now make a living knowing English. No, I haven’t yet figured out what I want to be when I grow up, whenever that may be. In the meantime, I write the occasional book.
View all posts by angelikarust →
This entry was posted in Book Reviews, Random Facts and tagged book review, Germany, historical fiction, horror, Nazis, raccoons, thriller, vampires, war fiction, world war, WWII. Bookmark the permalink.