Days in Tarvisio, or The Things We Do For Our Kids

This summer, when we asked the kids where they wanted to go, they surprisingly said “mountains.” Not that they’re much into hiking, it’s just that ever since we took them to Tyrol, Austria, at one point in the past, they’ve been associating mountains with finding pretty pebbles in riverbeds, and skulls stuffed into hidden crevices in stone walls, and they’re constantly craving more pebbles and, naturally, more skulls.

I remembered my own hiking days as a kid with my parents, and a bit of internet searching did the rest. We ended up in Tarvisio, Italy. First things first: Go there, and do it now. They’re currently polishing up the area to make it attractive for summer tourists. Skiing, thus winter tourism, is in decline, and everybody needs to make a living somehow, but as beautiful as the place is, it will soon be brimming with people, so visit it now, as it might not be as beautiful much longer. There’s already

quite a large bit of evidence of human stupidity; Monte Canin, a glacier once upon a time, is now a huge pile of rubble with the occasional spot of snow. The reality of climate change becomes obvious up there.

Tarvisio is a border town, complete with a weird mix of rural Austrian and Italian architecture, and impressively quintilingual waitresses. (I’m serious. One woman I spoke to was as good as fluent in Romanian, Hungarian, German, Italian, and English.) According to the kids, they have the best pizza in the world, the best lemon soda, and pretty good ice cream. (Nothing beats Zanoni in Vienna when it comes to ice cream, so any other place can never be anything better than pretty good.) 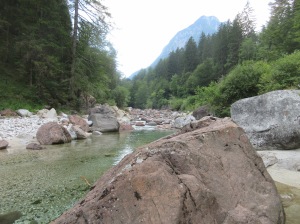 down a road which accidentally runs along the perfect riverbed (where we almost drowned a raccoon, lesson learned, don’t let the toys take selfies in a river), is Lago del Predil, a lake of such perfection, it’s unreal. Nestled between craggy mountains, the water is crystal clear and turquoise. It’s like straight from a picture book. 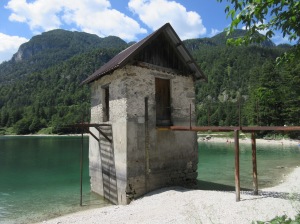 I wouldn’t have minded staying there for the entire week, but the kids needed adventures, so I suggested we try the hiking trail around the lake. Four hours, it said on the tourist information sheet. Family friendly.

Yeah, right. If you ever go there, do not, under any circumstances, follow the blue or yellow markings. They don’t show the right way. In fact, they’re probably a trap, or an elaborate prank. Because after two hours of not family friendly hiking, more like semi-professional climbing, only we didn’t have any of the gear, upwards, downwards, slipping and sliding, with on occasion a tuft of grass being the only available handhold on an almost horizontal slope above a straight drop, we finally ran into a wall, quite literally, and a Belgian family who were hoping that we’d know the way. One look at their dog and our kids and that wall which I might just about have managed to climb if I had been on my own, and we knew that turning back was our only option. Of course we managed to follow yet some more wrong markings, and ran out of water, but I have never been more proud of the kids. They hardly complained, and instead kept looking out for each other along the way, passing on warnings of slippery spots and treacherous roots, and later showing off their scratches. A double helping of ice cream soothed any remaining aches. We ran into the Belgians again the next afternoon and had a good laugh together. I still regret that we failed to swap names and contact details.

The next day the kids said they wanted a calm day, a little break from that hike’s exertion. Maybe we could go to that ropes course we’d seen on the info sheet? Yes, you read that right. The kids suggested a ropes course as a cosy, sedate activity. Weird. Off we went. Our daughter dragged me onto the hardest course there was, the one where kids weren’t allowed to climb without a parent, the one she was actually too small for and needed a bit of help to reach all the safety lines and carabiners and stuff. Now, I’m not really afraid of heights. I respect them, though, and believe me… that moment when you’re on a platform, four meters up in the air, and your kid is on the next platform, ten meters away from you, and connecting you, separating you, is nothing but a wildly swinging rope you’re supposed to walk on… that’s when you realize exactly just how much you’re willing to do, to risk, for your kids. There’s no hesitation. Any fear goes on the back burner, to be examined and analyzed later. That experience alone would have made our entire stay worthwhile for me.

Oh, and in case you were wondering… 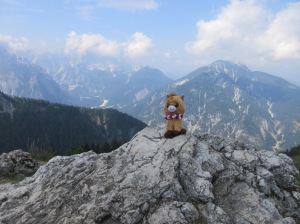 yes, Harriet enjoyed it too.

My name is Angelika Rust. I was born in Vienna in 1977. These days, I live in Germany, with my husband, two children, a despotic couple of cats and a hyperactive dog. After having tried almost every possible job from pizza delivery girl to HR consultant, I now make a living knowing English. No, I haven’t yet figured out what I want to be when I grow up, whenever that may be. In the meantime, I write the occasional book.
View all posts by angelikarust →
This entry was posted in Ramblings and tagged adventure, climbing, family vacation, HarrietOnTour, holidays, Italy, Lago del Predil, Monte Canin, parenting, ropes course, Tarvisio. Bookmark the permalink.