Posted on September 19, 2016 by angelikarust

I come from a tiny, alpine country, which lost what political importance it might once have possessed around 100 years ago in a pretty castle west of Paris, when lands were divided and a French president reportedly muttered, ‘The rest is Austria.’ Resentment over that might have played a role some 20 years later, and made the silly, tiny country cling to the equally silly, ten times bigger country to its North, in a shared attempt to kick the rest of the world’s ass. We know how that ended. A weasel politician drank a Russian under the table and thus achieved that Austria was able to claim having been the first victim of the Germans and no, not guilty at all, honestly. Or that’s how the story likes to be told. The other condition, aside from winning the vodka battle, was that Austria signed up for permanent neutrality.

Yes, this means that it is written into the Austrian constitution that Austria will not engage in any war ever again. I didn’t understand the dealings and reasonings and overall politics behind this when I was a kid, but I did understand one thing: War is horrible, war is cruel, war kills people, and we are not having it again. Never, ever. We’ve learned our lesson.

I was born in 1977, so when I grew up, this is what I was fed with: The US are good. The Soviets are bad. People in the West are happy and free. People in the East are poor, starving and oppressed. The Iron Curtain was next door. When we went swimming in Lake Neusiedl (a lake extending from Austria right into Hungary) we’d see watch towers, and sentries armed with rifles, and barbed wire. Beyond that barbed wire was pure evil, our childish minds knew that for a fact. People tried to escape from there, via the lake, breathing through straws (Lake Neusiedl is only around 2 meters deep. In particularly hot and dry summers, you can walk straight through without ever dunking your head in). To my eyes, everything behind that Iron Curtain was a huge, gray, dangerous mass. I remember asking my big brother, what if they attack us? Would we even be allowed to fight back? He answered, the US would protect us. That felt safe. The big, good, hero US.

I only started being interested in politics when adolescence hit full force sometime around 14, but I did occasionally listen to the news even before that. And something must have stuck, because among all my blurry childhood memories, there’s a very clear one, probably from the Iran/Iraq times, of me asking my mother, ‘Why are the US always at war?’ (They are. Check it out.) I couldn’t understand it. I was taught that war is bad and we’re not having it anymore. My mother bit her lips and replied, ‘It’s been too long since they had a war on their own soil. They don’t remember what it’s like.’

I suppose that was where I first stopped seeing the US as the heroes who’d come to save us. And the line between intervening and meddling is a thin one. I remember 9/11. My husband and I were traveling back from Germany, and stepped off the train in Vienna to my brother-in-law’s frantic words, ‘Have you heard it?’ When we arrived at my mother’s place, video footage showed explosions and falling towers. We were shocked. Usually, if something horrible happens, in Austria there’ll be jokes about it on the next day the latest. That’s not disrespect, it’s just our natural coping mechanism. Laugh, life goes on. There’s a saying that, roughly translated, goes, ‘It’s better to lose a good friend than to miss the opportunity to make a bad joke.’ It was two weeks before I heard the first joke. That’s how shocked we were. But there was something else, too. Voices, mean, whispering, ‘They had it coming. That’s what you get when you constantly meddle in the affairs of others.’ The US, seen as the world police for so long, suddenly were perceived as the bad guys, only out to impose their ideals on others, or worse, only out for oil. I didn’t want to believe that about my childhood heroes. And then shit went really down the drain.

In 2003, the US were still busy in Afghanistan unsuccessfully hunting down the Taliban and bin Laden, I was working for a museum of contemporary art, in the PR department. We all felt like something wicked this way was coming. What came first was an e-mail from an American journalist, not only to our department, but to every PR unit in Europe that woman had ever worked with. It was at least a page long; an apology for whatever it was Bush was going to do next. She said she didn’t know what it was going to be, but that it was due to be horrid, and that it would not represent the will of the American people, and we should please not judge them by George W. Bush’s actions.

I was in a state of denial. There was no reason to invade Iraq, no ties to 9/11, nothing. War is bad, remember? You don’t just go to war on a whim, just because you can. It was not going to happen. Madness. Nobody in their right mind would…

And now it’s probably the time to wrap this up and make a long story short. You see, a few days ago, I saw a meme. It showed George W. Bush bumping chests with a soldier. 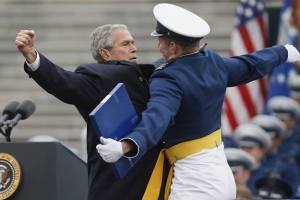 The caption was, ‘Did you see pics like this in the last 7 years?’

Which tells us, what?

What the hell, America? War is cool? Invading a country on false premises – not to mention the blatant lies – is what gets you elected? Killing 150k people (mostly civilians) and leaving the region in ruins and ripe for extremist views to reign and terror to root is okay because you get to bump chests with soldiers?

I don’t understand this. I really don’t. I don’t know why only Kuala Lumpur judges Bush as a war criminal. I don’t know why Den Hague keeps sleeping on this. I don’t understand how there always seems to be money to be spent on wars, but never enough for education or health care. Afghanistan, Iraq, Lybia, Syria. What did it get us, is still getting us? Leaving aside all the conspiracy theories about who really founded the Taliban and stuff like that, let’s just boil it down to one simple question. Is the world a safer place now?

I know this does not apply to all Americans. I’m trying hard to do what that journalist asked us to – not judge the American people by the actions of their leaders. But the overall impression remains, and it’s a crazy one, and it gets reinforced during the current election process, by how a guy like Sanders got kicked out of the race while a guy like Trump appears to be on the rise. Please. You were hippies once. You used to march for peace. What happened? Somebody explain.

(Articles you might find interesting: Iraq War Lies, in which we learn that Britain conducted a report on their Iraq involvement, but the US has yet to do the same, and The Secret Casualties of Iraq’s Abandoned Chemical Weapons, in which we learn that the famous weapons of mass destruction the US were determined to find in Iraq turned out to be old chemical munitions in hidden caches and roadside bombs, all manufactured before 1991, and that in five of six incidents in which troops were wounded by chemical agents, the munitions appeared to have been designed in the United States and manufactured in Europe.)

My name is Angelika Rust. I was born in Vienna in 1977. These days, I live in Germany, with my husband, two children, a despotic couple of cats and a hyperactive dog. After having tried almost every possible job from pizza delivery girl to HR consultant, I now make a living knowing English. No, I haven’t yet figured out what I want to be when I grow up, whenever that may be. In the meantime, I write the occasional book.
View all posts by angelikarust →
This entry was posted in Ramblings and tagged 9/11, America, George W. Bush, ideology, Iraq, lies, madness, oil, peace, Taliban, terror, US, war. Bookmark the permalink.